Well, it has been a busy 2 months.  At times, I look around and wonder where the time went.  It takes a long time to get the solid foundation laid before proceeding.
I am doing well.  Pretty tired, but I still have lots of energy and believe I am still on schedule to have everything completed by May 1st (arbitrary "end date").
I found a church nearby and am excited about getting plugged in and meeting people.  The Steelers winning the division championship was fun :-)  Too bad about the Super Bowl, but I still had a good time watching it :-)
Solid Foundation:
Heater / AC (done)
Plumbing (mostly done) ***
Whole-House Re-wire (done)
New Roof & Remove Condemned Addition (contractors are starting Monday (hopefully))
Hang Sheetrock and Fix Plaster (Contractors starting first week of March)
Next Milestones:
Roof, Windows, Soffit & Fascia --> Completed by March 14th or so
Sheetrock hung --> Completed by March 1st (hopefully)
Plumbing Fixed --> All Completed by February 20th (I hope)

Master bathroom --> All but plaster done by March 1st? (would be nice)
Looks pretty optimistic... but I'll stick with it :-)
Some Pictures & Story:
I thought that "exposed brick" would be a real nice addition to a few rooms... (kitchen and master bath) BUT... it turns out the brick Chimney was never bricked up nicely, it was always intended to be covered... so, i have to cover it back up. 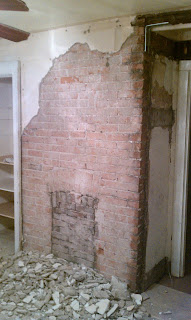 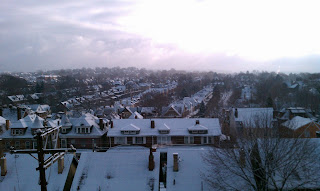 Before i got new stairs... there were no stairs up to the first landing. 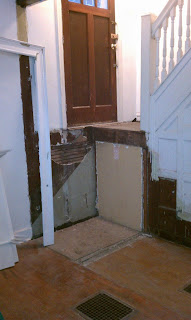 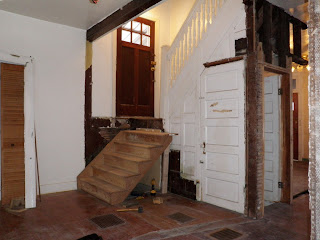 Kitchen work:  There was a "pass through" long-since plastered over.  Pretty neat though. 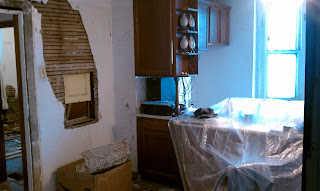 I found a nice hardwood floor under the disgusting linoleum. 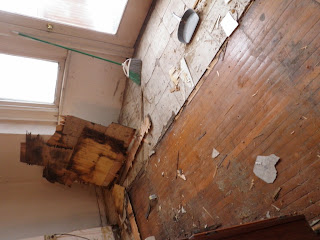 The Electricians just started the re-wire.  Here is the new circuit breaker box. 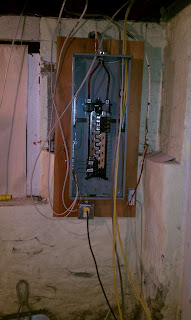 I decided i wanted a couch upstairs so I could relax... so I carried it up 2 flights of stairs (Four, half flights).  It was hard, but people can do amazing (strange) things when they are stubborn enough :-) 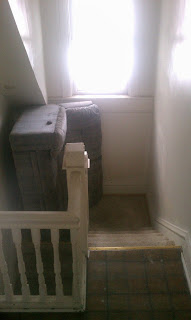 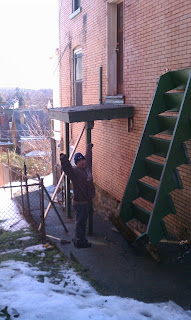 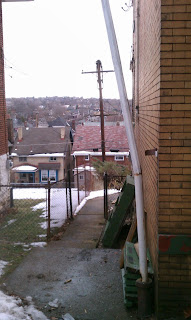 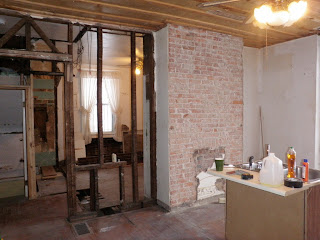 Floor has a few holes after i removed some walls. 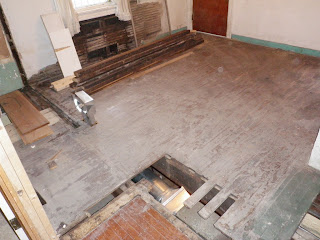 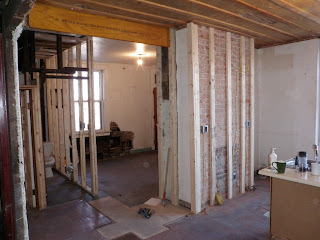 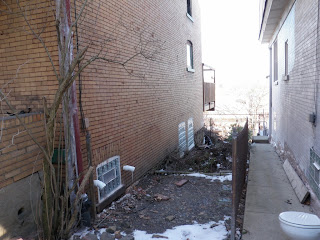 I'm waiting for this addition to dissapear... but my contractors seem content with any excuse not to show up.  I'm frustrated, but still think that for the time, they are my best option.
"Too cold"
"Snowed yesterday"
"Attached trailer wrong & bent something"
"Don't wanna start working on a Friday because we'll only
get one day done and take the weekend as a break"
...This lead to about a 2 week delay so far.
"We're not in Houston anymore Tomo..." 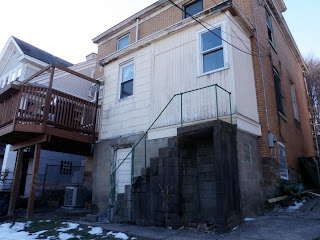 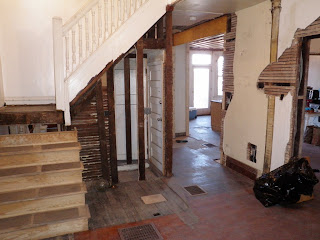 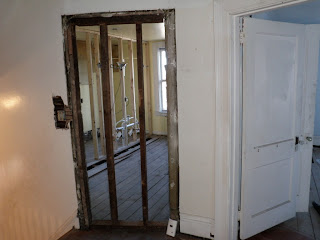 Tom Gets a Plumbing lesson when he thinks he is all done.  :-( I thought I was all done... and had a plumbing inspector come out. It turns out there are a lot more rules to plumbing than I expected.  The inspector knew them all though, and helped me figure out how much drain & vent I need to do / re-do.  :-(  My guess is about 30 hours & $150 in materials on top of what I had done.  Not super tragic, but a 'drain' on my energy for sure. 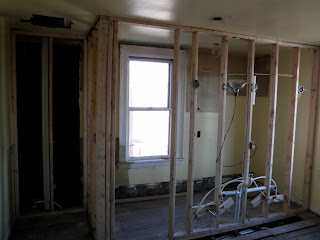 You can see the master shower (where it will be) off to the left side here. 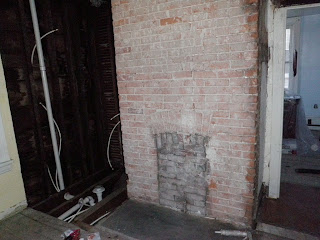 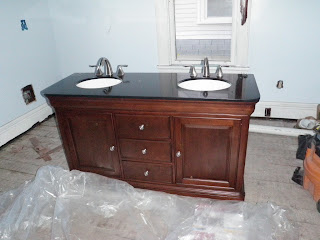 An example of plumbing I get to do again... Turns out you aren't allowed to have short radius 90 degree elbows on their side like I have here... Oh well.  I learn best when it hurts a little.  I hope i get it right the 2nd time.  :-) 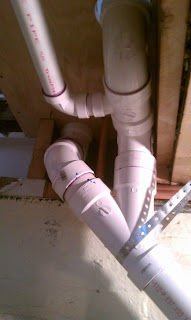 Thanks for checking in :-)  Prayers are welcome as I journey towards a faith community & attempt to start my career playing with houses.
Posted by Tom at 2:15 PM 4 comments: